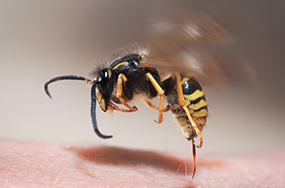 On any given day in the Rochester area, a large number of allergens are carried through the air by the breeze.

A small percentage of allergic patients, however, are more likely to find their allergies flying through the air by their own power. More than 2-million people in the United States have an allergy to insect stings. In Rochester, insect-allergic people are at risk because our warm and humid climate is an ideal environment for bees, wasps, yellow jackets, hornets, fire ants and many other stinging insects.

If a highly allergic person receives a bite or sting from an insect, it can be deadly without swift medical treatment. Around 50 people die each year in the United States from insect stings. Even though this risk exists, many insect-allergic people can live normal and active outdoor lives.

By setting up a treatment program with an allergist, we can desensitize an individual's insect allergy over a period of time through immunotherapy. For a normal person, an insect bite causes a little swelling and itching. But for the insect allergic person it can mean hives, asthma, dizziness and/or anaphylactic shock. Without immediate treatment, it can cause death by cardiac arrest. In such cases, a shot of adrenalin is the only thing standing between life and death.

But peace of mind is not hard for an insect-allergic person to attain. Immunotherapy (allergy shots) produces a 95% success rate in reducing the severity of sting reactions. There is also an emergency-use "pen" that contains an injection of adrenalin designed to be used by those with health-threatening insect allergies.

In immunotherapy, weekly shots of the insect venom that is causing the reaction are given in gradually increasing doses over a period of time until they reach the amount injected by the insect in one or two stings. This level is considered the maintenance level and will then be phased back to a monthly basis.

Diagnosis and treatment is done as needed on a patient-by-patient basis. Immunotherapy treatment can last for three to five years. To receive a proper diagnosis, the patient may have to undergo skin tests to determine which insects cause an allergic reaction and how severe the reaction is. These tests help doctors determine if allergy shots are needed. Even though the allergy shot therapy has a high success rate, the best policy for insect allergies is to avoid insects altogether.

Some tips to keep flying insects away are: keep garbage cans clean and covered; discard picnic foods and wrappers promptly; do not invade the insects' territory by chopping, clipping or mowing; do not wear scented cosmetics, hair sprays or bright flowery colors- they attract bees; wear shoes outdoors; if you are stung by a bee, remove the stinger and venom sac by scraping it gently with your fingernail. Do not attempt to pinch the sack, as you may squeeze more venom into your system.

With a few anti-insect precautions, summer can be a fun time for all.

If you are allergic to stinging insects, you should be evaluated at our office, in order to prevent further reactions in the future.