Our Doctors Specialize in Diagnosing Asthma Based on the Patient’s History and Physical Examination, as Well as Specific Tests, Such as Spirometry 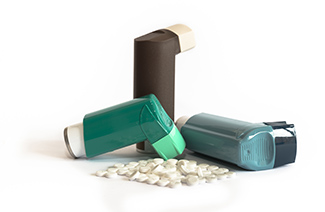 Asthma is chronic inflammation of the respiratory tract, and individuals with asthma have very sensitive airways caused by inflammation, which causes increased mucus production.

Mucus lingering in the bronchial tubes causes a response in the form of a cough. This coughing often occurs more frequently in the morning and at nighttime.

Further inflammation is produced by swelling of the bronchial wall, as well as spasms of muscles in the surrounding bronchi. That, in turn, is what causes wheezing (whistling sounds coming from the lungs), shortness of breath, chest tightness and heaviness.

However, milder forms of inflammation such as cough, tightness and heaviness, may go undiagnosed for a while. Anyone with exacerbations of asthma requiring Emergency Room (ER) visits, hospitalizations, or oral steroids should be evaluated for asthma by an allergist, according to the national medical guidelines.

Asthma in children has unique risks due to the fact that children’s airways are already narrower and less stiff than adults.

So, even a small amount of inflammation and swelling can cause serious problems. Frequently, the only signs of asthma in children are a persistent cough at nighttime, especially after an upper respiratory infection or exercise.

Asthma affects about 4-8% of pregnant women. Any woman who has asthma while being pregnant should be monitored for her level of asthma symptoms, because poorly controlled asthma may be dangerous for the developing baby. The medications used for asthma control are safe to use during pregnancy. However, we strive to use the lowest possible dose of those medications that still provide adequate asthma control.

If you are experiencing any form of asthma, don't delay, contact our office to get help!

The main goals in the treatment of asthma are to limit symptoms, increase the quality of life, as well as prevent long-term damage to the lungs.

There are two types of medications used for asthma treatment:

Asthma can be intermittent or persistent.

Persistent asthma can be mild, moderate or severe.

At our office we treat all forms of asthma, giving patients a thorough examination and emergency action plans to minimize hospital visits and the need for oral steroids.

To get comprehensive asthma testing and treatment from Rochester's leading experts,
give us a call today at (248) 651-0606 to set up an appointment.