One in Three Women Experience Allergic Rhinitis During Their Pregnancy 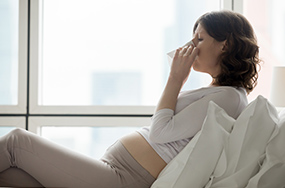 Chronic nasal symptoms occur commonly in pregnant women, adding to the array of health care concerns during this exciting (yet intimidating) time of life.

Some studies indicate that substantial symptoms of rhinitis occur in 30 percent of all pregnant women. Pregnancy-associated hormones have been linked to swelling of the mucosal lining of the nose. These hormones may also indirectly affect the nose through their effect on blood volume during pregnancy. Circulating blood volume increases to 40 percent above non-pregnant levels, which may lead to increased nasal airway resistance during pregnancy.

A physician must evaluate a patient and diagnose what type of rhinitis is causing the nasal symptoms and then great care must be used to formulate a treatment program that will be effective, yet safe for the pregnant woman and the fetus. Routine allergy skin testing during pregnancy cannot be recommended since the potential exists for systemic reactions in very sensitive subjects which could lead to adverse fetal effects.

"Allergic rhinitis is probably the most common overall cause of gestational nasal symptoms," asserts Dr. Ringwald. "It may occur for the first time during pregnancy but it usually has occurred previously." He goes on to explain that allergic rhinitis is characterized by sneezing, runny nose, nasal itching, and perhaps eye itching. It may be seasonal and is frequently triggered by allergens such as house dust, grass, and animals.

Avoidance of any known allergen is especially important during pregnancy. In particular, avoidance of cigarette smoke is significant, not only because of the potential adverse effects on the baby, but because of the effects of smoking on chronic rhinitis/sinusitis. If a patient has been taking allergy injections, these should be continued during pregnancy. A slightly lower maintenance dose may be prescribed to decrease the chance of a systemic reaction. Immunotherapy should not, however, be started during pregnancy.

Bacterial rhinosinusitis is accompanied by sinus pain, postnasal drainage, and a purulent discharge. This type of rhinitis is not allergic in nature. It frequently follows an upper respiratory infection and seems to occur with increased frequency during pregnancy. Symptoms of ear congestion, fullness or stuffiness frequently occur during pregnancy and may be associated with bacterial rhinosinusitis.

Rhinitis medicamentosa is congestion that is brought on by inappropriate use of vasoconstricting nose sprays. Especially during pregnancy, use of any over-the-counter medication should be approved by your physician.

Non-specific post-nasal drainage is post-nasal drainage with clear or white mucus. Nasal congestion in this condition is not a major symptom. If neither allergy nor infection can be documented it may be directly related to the gestational hormone effects on nasal mucosa.

The discomfort caused by all these types of rhinitis may not be tolerated as well by the pregnant woman who is experiencing other physical and psychological stress. Rhinitis can adversely affect pregnancy through an effect on the mother's eating, sleeping, and emotional well-being or by worsening associated conditions such as asthma or sinusitis. The physician must weigh the benefits/risk considerations in the treatment of rhinitis during pregnancy.

In treating rhinitis in a pregnant patient every attempt should be made to use as little medication as possible. Before medication is suggested, non-medical solutions should be tried. For example, a buffered saline nasal spray may be useful for the dryness, bleeding, and vascular congestion associated with rhinitis during pregnancy. Patients with prominent post-nasal drip during pregnancy may benefit from twice daily saline irrigation with a bulb syringe.

The avoidance of allergens and non-specific irritants (aerosols, alcohol, temperature changes, smoke) cannot be stressed enough as a valuable approach to rhinitis symptoms.

We encourage all of our allergy patients to notify us when they become pregnant. If problems do arise we can jointly devise a treatment program so that - optimally - rhinitis does not cause distressing physical symptoms during pregnancy.

Contact us today at (248) 651-0606 to set up an allergy treatment program for ensuring a symptom-free pregnancy. Our highly experienced Michigan board-certified doctors are here to help you!