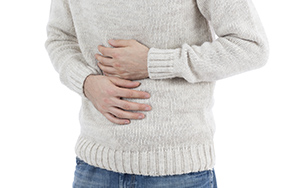 Up to 20% of the adult population have symptoms compatible with irritable bowel syndrome. Most of those people, however, never seek medical attention.

Irritable bowel syndrome is a chronic lifelong condition. It starts usually in the late teens to early 20’s, however, it can affect any age group. Most of the time it consists of: (1) abdominal pain, (2) altered or fluctuating bowel frequency or stool consistency, (3) abdominal distention or bloating, and (4) varying degrees of anxiety or depression.

Patients may have additional symptoms of indigestion, heartburn, chest pain, fatigue, problems with urination, and many of those patients are evaluated for a variety of problems, including cardiac evaluation, abdominal x-rays, colonoscopies or gastroscopies, which are all normal despite the patient having constant problems.

For some people, irritable bowel syndrome may be disabling causing difficulty at work, with their social life, and sometimes even with traveling short distances. It occurs more often in women than men.

What are the Symptoms of Irritable Bowel Syndrome?

The symptoms can vary from patient to patient, with some being relatively mild, and some disabling. Patients may complain of a bloated feeling, gas, abdominal pain or cramps. There may be diarrhea or constipation. Sometimes those symptoms can alternate. There may be variable amounts of mucus in the stool. Patients with diarrhea frequently feel an uncontrollable and urgent need to have a bowel movement.

What is the Cause of IBS?

At this point there is no clear established cause of IBS. There are several theories, including:

Irritable bowel syndrome diagnosis depends mostly on a thorough medical history and physical exam. Most of the patients coming to our office have already had an extensive evaluation by a primary care physician and gastroenterologist, and have performed frequent colonoscopies, CAT scans, and gastroscopies.

We are concentrating on trying to evaluate the patient’s bowel problems in correlation to possible food allergies. We want to find the cause of the bowel problems, and if possible eliminate the offending foods, which frequently improves the patient’s symptoms dramatically. We are helping our patients to devise diets, which help reduce symptoms and increase control of their irritable bowel.

Contact us today at (248) 651-0606 to set up an appointment for allergy testing. Our highly experienced Michigan board-certified doctors are here to help you!