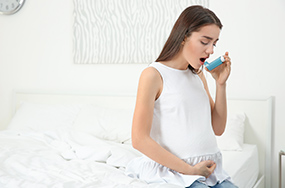 The "infanticipating" mother is often overwhelmed by health care concerns, and the situation is certainly no easier for the mother-to-be with asthma.

The key to a successful pregnancy for asthma sufferers is symptom management. Maternal asthma that is adequately controlled during pregnancy does not increase the risk of maternal or infant complications.

Uncontrolled asthma causes a decrease in the oxygen in the mother's blood. Since the fetus gets oxygen from the mother's blood, asthma can lead to fetal blood oxygen. Normal growth and development requires a constant supply of oxygen, which again underscores the need to manage the symptoms. Studies indicate a correlation between uncontrolled asthma and babies with a lower birth weight. In rare cases, the extremely hard coughing that accompanies an attack can cause premature labor, or can cause the placenta to separate from the uterus.

The goal of asthma therapy during pregnancy is virtually the same as in non-pregnant patients. The goal is to prevent hospitalization and emergency room visits as well as lost time at work and chronic disability. Avoidance of allergens and irritants including exposure to pets and the harmful effects of cigarette smoke becomes especially important in controlling asthma. Alcohol should also be avoided by pregnant women with asthma, because it can harm the developing fetus and cause bronchial constriction as it is exhaled through the lungs.

The pregnant asthmatic should be monitored carefully and the selection of medications should be reviewed by a specialist. Doctors are very cautious about the use of drugs during the first three months of pregnancy even though most anti-asthmatic medications are considered safe during pregnancy. The medications do not appear to be associated with increased congenital malformations, nor is there is any evidence that anti-asthmatic drugs (theophylline, beta agonists, cromolyn sodium, or steroids) will adversely affect a nursing infant. As long as the asthma is controlled, the pregnancy and its outcome do not appear to be adversely affected by the mother taking cortisone (steroids) orally or by inhalation.

While theoretically, some medications may contribute to an increased risk to the fetus, it is important to understand that the risk of uncontrolled asthma far outweighs the risks associated with necessary medications. Aerosols and sprays are preferable to oral medication when this treatment option exists because in this form, almost none of the medication enters the bloodstream and crosses the placenta.

Allergy shots may also be continued without adverse effect on pregnancy. However, the shots should not be started during pregnancy, and dosage should be carefully monitored because of the risk of an allergic (anaphylactic) reaction to the shots. Such a reaction, though rare, could be harmful to the fetus.

Pregnancy can affect the relative severity of asthma. Some patients experience an improvement of their symptoms during pregnancy; others have increased symptoms; and some see no noticeable change in their asthma at all. For a fortunate minority, asthma improves during pregnancy. The exact reason for this is unknown, but the increase in the body's cortisone level during pregnancy may be an important cause of the improvement which can occur.

Then again, asthma symptoms may be worse during pregnancy. Some women experience gastroesophageal reflux causing belching and heartburn. This reflux, as well as sinus infections and increased stress, may aggravate asthma. Asthma has a tendency to worsen during pregnancy in the late second and early third trimester. Many women experience less asthma during the last four weeks of pregnancy. This may be due, in part, to the increase of prostaglandin E reported to occur during this time period of pregnancy, or it may be that the "dropping" of the baby in the final weeks of pregnancy takes pressure off the lungs, resulting in easier breathing.

Troublesome asthma during labor and delivery is extremely rare in women whose asthma has been adequately controlled during pregnancy. Most asthmatic women are even able to perform the Lamaze breathing techniques during delivery without difficulty. The increase in plasma epinephrine that occurs during labor and delivery may contribute to the absence of asthma symptoms during this critical time period. Some studies suggest that the pattern that asthma symptoms follow initially may be reported in subsequent pregnancies.

"When episodes of severe asthma are avoided, nearly all women with asthma have normal pregnancies," affirms Dr. Ringwald. "When problems do occur, we counter them by an appropriate change in the management program." Dr. Ringwald and Dr. Czarnecki encourage asthma patients to notify the office when they become pregnant. With timely self-care management, asthma sufferers need only worry about whether to paint the nursery pink or blue!

Contact us today at (248) 651-0606 and set up an appointment to develop an effective asthma treatment program during your pregnancy. Our highly experienced Michigan board-certified doctors are here to help you!